The history of the Aikins-Farmer Funeral Home began in the early 1920s when Mr. Fred Aikins entered into the funeral profession with Mr. A.J. Gibbons, owner of the Gibbons Funeral Home and Lumber business of Metropolis.

In 1927 Fred and his wife Lizzie Foreman Aikins formed a partnership with Mr. Dewey Fleming. This became Aikins-Fleming Funeral Home with Chapels in Metropolis and Joppa. Following the sudden illness and death of Mr. Fleming it was then that Mr. and Mrs. Aikins established Aikins Funeral Home.

Joining the business in 1940 was Fred and Lizzie’s daughter Lowanda and her husband, Ike Farmer, a graduate of St. Louis College of Mortuary Science.

In 1952 Owen “Steve” Farmer, nephew of Ike Farmer, graduated from St. Louis College of Mortuary Science. Steve and his wife, Jeanette (Patton) Farmer settled in Metropolis and became affiliated with the business.

The First United Methodist Church, which was adjacent to the funeral home, was destroyed by fire on January 11, 1970. In order to rebuild, the church purchased the funeral home property. A building site was selected in the Hospital Addition and a new funeral home was completed in August of the same year.

In 1973, the Kennedy Funeral Home in Brookport, Illinois was purchased from Gladys Morris and renamed, Aikins-Farmer Brookport Funeral Home. This facility was demolished and rebuilt in 2000. The original neon clock was incorporated back into the sign.

Over the years, Aikins-Farmer has always maintained their professional standards. Aikins-Farmer Funeral Home will continue to serve the community with pride and dignity. We are dedicated to the care of those we serve.

Baynes Funeral Home was established in 1912 by William Pinkey Baynes, who settled into Metropolis about 1877, and here spent the remainder of his life. Early in life he became interested in city government, and was elected a member of the City Council at the age of 21, perhaps the youngest ever elected to that body. When only a lad, he was employed by the Roberts Box Company and remained with that industry for many years, serving the company last as a timber buyer. He severed his connections with the Roberts Box Company to engage in the furniture and undertaking business in 1912. Later he devoted all of his time to the funeral service.

On May 30, 1954, Mr. Baynes died at his home, leaving the business to his wife, who operated it along with her grandson, Ralph Frazier. Ralph became a licensed funeral director and embalmer, working at the funeral home for several years before becoming a doctor and leaving the funeral industry. Chancey Long was also very active in the funeral home after the death of W.P. Baynes.

On April 1, 1956, John L. Miller of Pana, Illinois, moved to Metropolis after purchasing the Baynes Funeral Home. He changed the name of it to Miller Funeral Home, and began servicing the community. Before coming to Metropolis, Mr. Miller had worked seven years at the Hebblethwaite Funeral Home in Evanston, Illinois. Mr. Miller was a graduate of Illinois Wesleyan University at Bloomington, and also Warsham College of Mortuary Science in Chicago. Mr. Miller was married to the late Mary Seiler of Pana. They owned and operated the funeral home for 27 years, giving courteous service to the community, before retiring in 1983. 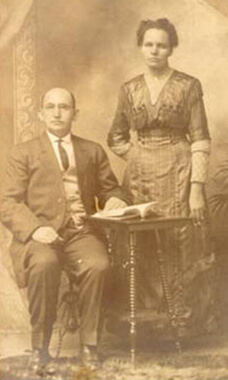 On July 1, 1983, Steven I. Farmer, a native of Massac County, assumed operation of Miller Funeral Home. Steven was the son of the late Owen "Steve" Farmer and Jeanette (Patton) Farmer. Prior to operating his own funeral home, Steven had worked with his father in the funeral business for several years. Steven married Sandra L. Otis, daughter of Lavern J. and Peggy (Baker) Otis in 1982. Sandra was formerly of Kankakee, Illinois, but has been a resident of this area since 1970. Together, they owned and operated the Miller Funeral Home, whose name they chose not to change.

Steven passed away on February 6, 2013, leaving the business to his wife, Sandy. Many additions have been made to the original building since operations began in 1912, making it larger and more convenient for the public. We are in our 102nd year of serving the public in the same building, and hope to continue doing so with the same professionalism and courtesy always shown in years past.

A year of daily grief support

Our support in your time of need does not end after the funeral services.  Enter your email below to receive a grief support message from us each day for a year.  You can unsubscribe at any time.